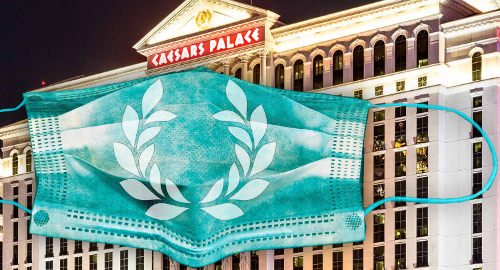 UPDATE: MGM Resorts has announced that it too will require mandatory mask use by “all guests and visitors inside public spaces at every MGM Resorts property in the United States.”

Casino operator Caesars Entertainment has become the first US gaming firm to impose a mandatory mask policy for both staff and customers following a spike in US COVID-19 cases.

On Wednesday, Caesars announced a new “universal mask policy” that took effect at noon at all Caesars properties currently open in Indiana, Iowa, Louisiana, Mississippi, Missouri and Nevada, plus tribal casinos in Arizona, California and North Carolina, and will apply to casinos in other states as they reopen.

“Everyone indoors,” which includes “employees, vendors, contractors, guests and passersby,” is now required to wear masks at all times, except when eating or drinking. Caesars CEO Tony Rodio said the scientific evidence was clear on widespread mask use limiting the spread of COVID-19 and any tough guys who refuse to mask up “will be directed to leave the property.”

Previously, Caesars required mask use only by staff and, following last week’s revised rules issued by the Nevada Gaming Control Board, table game players who weren’t separated from their dealer by a physical barrier.

Caesars made headlines earlier this week when word spread that staff at five of its properties were handing out $20 bills to members of its Caesars Rewards program who agreed to wear masks while on the casino floor. The company reportedly doled out $7,500 before Wednesday’s mandatory mask policy was imposed.

Caesars was likely prompted to make masks mandatory before regulators made the decision for them. Nevada is one of several states setting new records for daily COVID-19 infections this week, including 462 new cases on Wednesday.

The spike is partially due to increased testing but Nevada’s test positivity rate has risen every day for the past week. The rate currently sits as 5.7% after slumping below 2% when the month began (around the time that casinos were allowed to reopen).

The Culinary Union, which represents 60k casino workers in Las Vegas and Reno, has been pressing for a mandatory mask rule after concluding that only 10-20% of Nevada casino guests were bothering to wear masks.

Gov. Steve Sisolak said last Friday that he was considering imposing “enhanced face covering policies” but has yet to commit publicly to anything concrete. Sisolak is scheduled to hold a press conference on Wednesday at 5pm local time to address the recent spike in infections.