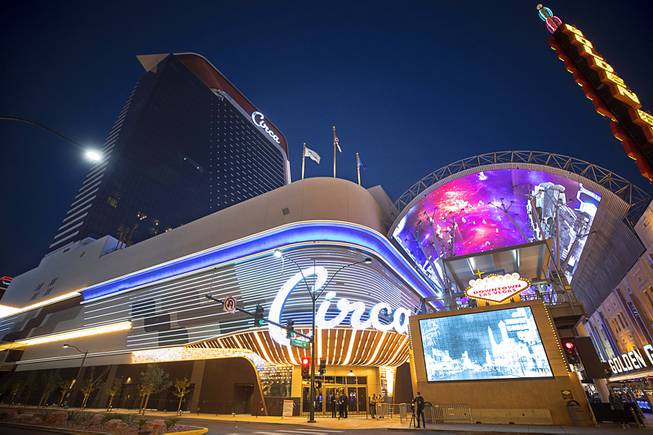 An exterior view of Circa before the casino opening in downtown Las Vegas Tuesday, Oct. 27, 2020.

In one amazing 48-hour span last week, Las Vegas celebrated two landmark events that served as a tribute to the ingenuity, boldness and resiliency that put our community on the global map.

The first came when the spectacular Circa resort opened Wednesday on Fremont Street, marking the completion of the first ground-up casino-hotel project downtown in four decades. That gala occasion was followed Thursday mid-morning with a groundbreaking ceremony for the new academic building for the UNLV School of Medicine, located on the Shadow Ridge campus not far away from the new resort.

In both cases, those special events marked the beginning of something transformational for Las Vegas. Circa takes the Fremont Street Experience to a heightened level of modernity and luster that will undoubtedly boost tourism downtown, while the new medical school building puts Las Vegas on a path toward improving the quality of our health care regionally and enhancing our economy through medical education and research.

For that, credit goes to two sets of community leaders with extraordinary vision.

Circa is the brainchild of Derek and Greg Stevens, the brothers who have been infusing downtown with energy since acquiring a 50% interest in the Golden Gate in 2008. They followed by purchasing what is now The D in 2011 and obtaining 100% ownership of the Golden Gate in 2015 before embarking on Circa.

The new resort is simply stunning, a marriage of contemporary design and old-school Vegas featuring a 777-room hotel, a tiered water complex with six pools and two spas, and a colossal sports book, along with touches like historic Las Vegas images and artifacts, and the refurbished Vegas Vickie sign that once stood along Fremont Street.

The Stevenses haven’t revealed the cost of the resort, but needless to say it was a massive investment in downtown and in the future of Las Vegas.

We salute them and wish them the best as their new venture gets underway. They’ve shown once again that big, bold visions not only have a place in this town, they are the soul of Vegas.

As for the medical school building, credit goes to a broad group of Las Vegas philanthropists, civic leaders and campus administrators who worked unflaggingly to launch the UNLV School of Medicine in 2017 and devise a plan for construction of the new academic building.

In 2019, after years of facing hurdles from state-level higher education overseers on the project, the group cut to the chase by forming a nonprofit development corporation to construct the building with a combination of private and state funds. Once built, the $150 million facility will remain owned by the development corporation but will be leased to UNLV for $1 per year.

This was a practical, elegant solution to what had been a highly frustrating process. Before the development corporation was launched, three proposals for construction of the building came and went amid acrimony between donors and the Nevada Board of Regents and Nevada System of Higher Education.

But unfortunately, the medical school is still facing some uncertainty after state lawmakers withdrew $25 million in funding for the building amid state budget-cutting brought on by the coronavirus pandemic.

Supporters said at the groundbreaking ceremony that they’re advocating with state lawmakers to restore the funding, while also looking for third-party funding such as federal grants.

“It is irresponsible to just continue to build buildings in Southern Nevada with philanthropic dollars,” said Maureen Schafer, CEO of the development corporation. “It’s unsustainable, No. 1, and No. 2, this community has too many needs. Philanthropists have, for so long, been filling those needs.”

Schafer was absolutely right, and our community’s state and national leaders should listen.

The building is a critical need for Southern Nevada, which will allow the school to expand to its full capacity of students. Currently, class sizes are limited to 60 per year, about a third of the designed capacity.

Bringing the medical school fully up to speed will make a huge impact on Southern Nevada, both by improving health care and helping expand our economy. The medical school offers potential to grow a lucrative biotechnical and pharmaceutical research sector here, which would diversify an economy that currently relies far too much on travel and tourism. In addition, improving our health care system throughout the valley will make us more attractive to businesses seeking to relocate or expand.

The bottom line: What started Thursday must be completed.

Las Vegas became the city it is today by constantly keeping an eye on its future, and taking bold steps to get us there. We had the audacity to embrace gaming at a much more puritanical time in America. During the jet age, we laid the groundwork to become an international destination. In more recent years, we adapted to changing consumer trends by blending in retail, dining, nightlife and outdoor recreation into our tourism offerings.

And we kept moving forward throughout the boom-and-bust cycles that have defined our history.

Both the Stevens brothers and the supporters of the medical school are doing just that today. We applaud them, and urge our leaders to follow their direction.