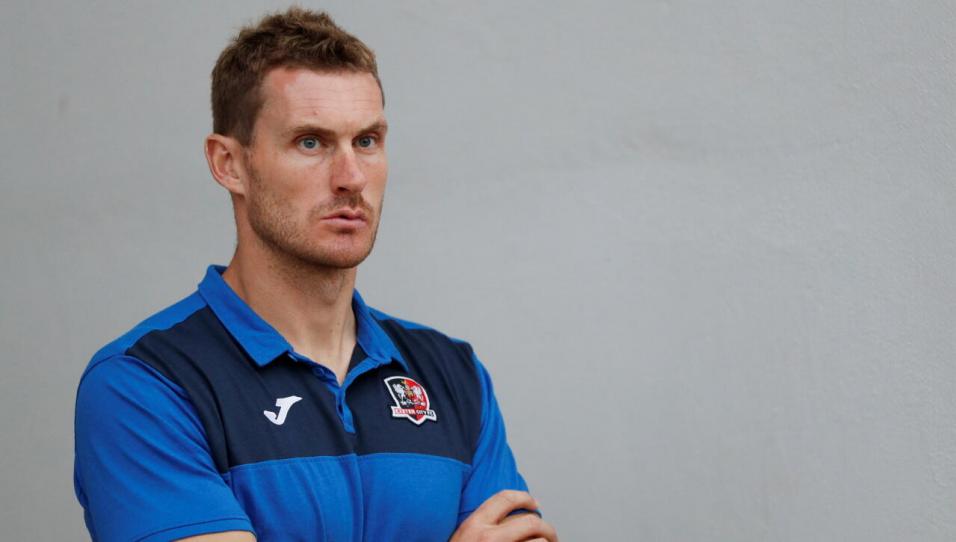 Cardboard cut-outs with faces that don’t cheer, whose eyes don’t move, in an eerily quiet stadium where the few voices that sound reverberate more than ever. Yet millions will watch via television, desperate for football action after a three-month break, one in which the participants have been tested for a scary disease which has unknown consequences. Some of them even tested positive. This is the new reality for footballers taking part in the English Football League play-offs. In some senses, it is like playing a reserve team match in front of a handful of spectators, or, as August breaks each year, the extra-preliminary round of the FA Cup.

First to step out of the Covid-19 pandemic into this unknown are Colchester United, training covertly as to not give much away and hoping that Southend United’s Theo Robinson can play (subject to English Football League clearance), and Exeter City. The visitors have also been cautious, having had no friendlies as warm-ups. It’s like pre-season (because of the break), but it isn’t. This is serious. Promotion is at stake, at the end of the strangest of seasons.

Robinson was on loan. That contract ran out last month. His deal at Roots Hall will soon be up. To prevent him from playing, one might argue, would be a restriction of trade because he has the opportunity. And John McGreal‘s team really needs him.

He has scored 11 League Two goals this season, from 19 starts and nine games off the bench. Exeter’s Ryan Bowman, with 13, is the only other player in the League Two play-off teams to have scored in double figures this season. Whether he plays or not, the match odds of [2.5] on a home win, narrower than Exeter’s for the game at [3.3], begin to look on the short side. The draw is [3.4].

Add in that Colchester are the only one of the four to have won fewer than 10 games at home (being nine) and the case for making them a bit longer increases. Opta add they have only one once in the past nine attempts against the Grecians (while both meetings this season ended level). On the other hand, they add, the home side between these two has finished unbeaten in each of their last seven encounters. The last time that statistic was broken was when Exeter won 3-2 at Colchester in September 2016.

Only die-hard fans will rely on the Opta statistic that Colchester, who finished the season sixth, share the position of the previous two play-off winners. They did win promotion, in their third play-off campaign and the last time they were in them, from the fourth tier in 1997-98. Since then, everything except some die-hard fans has changed. Before lockdown, Colchester conceded five times in their final two home games.

One reason for Colchester’s price being this short is Exeter’s recent away record, however. They lost five of their last six away games in all competitions before the season was curtailed. Matt Taylor, their manager, will hope that has gone out of players’ heads, along with the fact that they have conceded the most goals in the division away from home, 28, of the top seven clubs. Their away goal difference of minus six is double that of play-off rivals Northampton’s. Taylor knows that a dip in form in February and March cost his team automatic promotion. They did not win any of their last four League Two matches.

Roaming Randell could hold the key

Ultimately, maybe the break has done Exeter good and they look long if they have rekindled their best. Taylor can concentrate on the positives and a third play-off chance in four years. Maybe Randell Williams will be feeling just as good as he has all season, buoyed by Opta’s emphasis that his 14 assists is a League Two high this season. The winger also has five goals. Both are career season highs, even in a shortened campaign.

Taylor just needs his defenders – Tom Parkes, Aaron Marin and Jayden Richardson were the chosen three for the last match of the season – to stand firm and return to St James Park (where they have an excellent home record) without Colchester being out of reach. Will Pierce Sweeney rejoin them at the back now? Or the experienced Dean Moxey?

Taylor, who was once on loan for a month at Colchester, expects a tight affair again, his side having fought hard for a 2-2 draw at Christmas before a goalless one a month later on their own turf. Taylor just hopes, as do we all, that both teams can put a side out that represents their best through the season: fully fit and at the peak of their squad’s skills.

It’s with a sense that the Grecians might rekindle their form that took them to the threshold of automatic promotion – and therefore might benefit most from the break to reset – that I am going for the away win.

Bowman can fire an arrow in front of goal

Exeter have some great players who could open up defences – Nicky Law or Nicky Ajose – but it is appropriate that 13-goal Bowman should be the choice to net first if his side score first. It’s no surprise to find him highly placed (second) on the list on the Sportsbook goalscorers’ markets, at [5.5] to score first or [3.1] at any time. He’ll be favourite for the return leg.

For Cheltenham, odds are a bit tighter between Robinson at the top at [5.0] to score first and [2.9] at any time, plus then Luke Norris, who has nine goals this season, at [6.5] for first scorer or [3.8] at any time. The fact that the hosts have two such focal points rather than one perhaps gives them the edge in scoring first, so I’m taking a chance on Robinson. That discounts the talents of others, of course, such as Randell Williams and his high “supplier” statistics that have produced goals, and he is interesting at [12.0]. Kwame Poku scored quite regularly at the end of the season as well, and is [10.0].

A narrow away win

While the idea of a draw still appeals in some senses, there is more of a pull for that in the other semi-final. Therefore I am tempted by that away win, just feeling that perhaps Exeter’s eagerness to ensure they don’t fall at this play-off hurdle again kicks in and their adrenaline finds a way to edge a slight advantage in this tie.