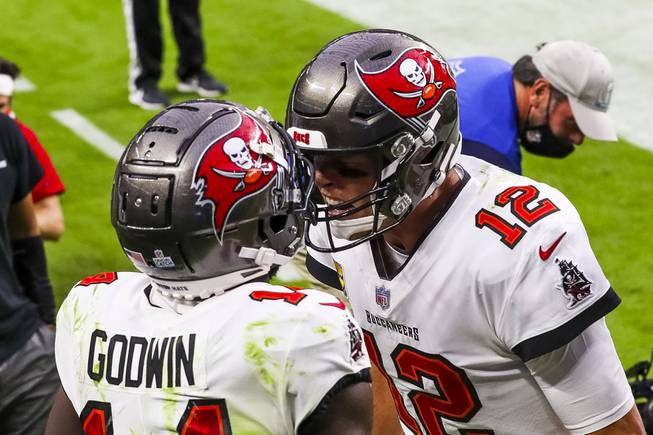 Down to two NFL games to bet on for championship weekend, it was time to get creative to make sure the Sunday Sweats column went on for another week.

Mixed martial arts filled the void, as a couple of plays on today’s UFC 257 card round out this week’s column. There’s one thing that’s not going anywhere though — the rollover money line bets, de facto future on the Tampa Bay Buccaneers, which has gone according to plan for two weeks.

After a pair of Buccaneers victories, my initial $100 investment is up to $315.80, which I’ll put back into action on this week’s money line of +165 at South Point as a bonus pick.

The Buccaneers’ play was the only reason last week’s column eked out a profit and my sights are on closing out the first full year of Sunday Sweats with a more profitable weekend.

Read on for the conference-championship version of the Sunday Sweats column. For accounting purposes, all plays outside of the pick’em will be linked and counted in the record. The records are attached to each individual category and totaled at the bottom of the page with the monetary figure calculated by the assumption of a bettor placing $100 on each play.

Snow does not historically affect scoring rates. Rain, wind and extreme coldness all have more impact, and none of those are in the forecast for Sunday at Lambeau Field. It’s slated to be a manageable 30 degrees with less than 10 mph winds, which are fine conditions for scoring. And both these teams should be able to score on each other. Green Bay’s defense has been mediocre all year, and Tampa Bay’s has slipped recently. The total closed 55 when the Buccaneers and Packers played each other earlier in the year, and this number should trend more in that direction by kickoff in the rematch.

From a technical standpoint, this might be the worst wager I’ve ever written about. But I’ve set myself up for failure by committing to this category for the full season, so let’s gamble. The Buccaneers are too efficient and match up too well with the Packers to get blown out. Staying within single digits shouldn’t be all that difficult. Teasing totals is a recipe for failure but everything about Kansas City and Buffalo hints a low-scoring game.

Let’s get crazy and turn this category into another one that’s fully non-football. There’s only so much that can be done with two games, and there’s no reason to ignore another massive sporting event taking place this weekend. There are a lot of big favorites on the UFC 257 card in Abu Dhabi, but I’d steer clear of many of them. These are three that I still find a bit underpriced. Movsar Evolvev (-550) and Amanda Ribas (-310) are the big favorites over Nik Lentz and Marina Rodriguez, respectively, but it’s Makhmud Muradov (-145) who really boosts the payout in his bout against Andrew Sanchez. Muradov is a star in the making and should be too much for a tough-but-less-talented Sanchez. The Uzbekistanian fighter is also worth a straight bet on his own.

The Bills were never going to let Mahomes run wild in this game. Now the Chiefs may not either. The reigning Super Bowl MVP was clearly hobbled last week by a foot injury — potentially a highly painful turf toe — even before he left the game with a concussion. He’ll be a little less mobile than normal, and this number doesn’t go far enough in capturing the change.

After hitting the first UFC main event of the year last week, let’s try to get a run started. My actual advice for betting this fight would be to wait and see if Poirier can get closer to +300 and/or hold off to make sure he survives the first couple rounds and place a wager on him live. McGregor will probably beat Poirier again —with an early stoppage his most likely path to victory — but it’s not as certain as the more than 75 percent probability this line is implying. Poirier is tough, improved and stronger mentally than when the two fought at MGM Grand Garden Arena in 2014. There’s a reason this line opened at McGregor -175. That was a much fairer price. McGregor is undoubtedly inflated now after taking all the action. Poirier has a chance.