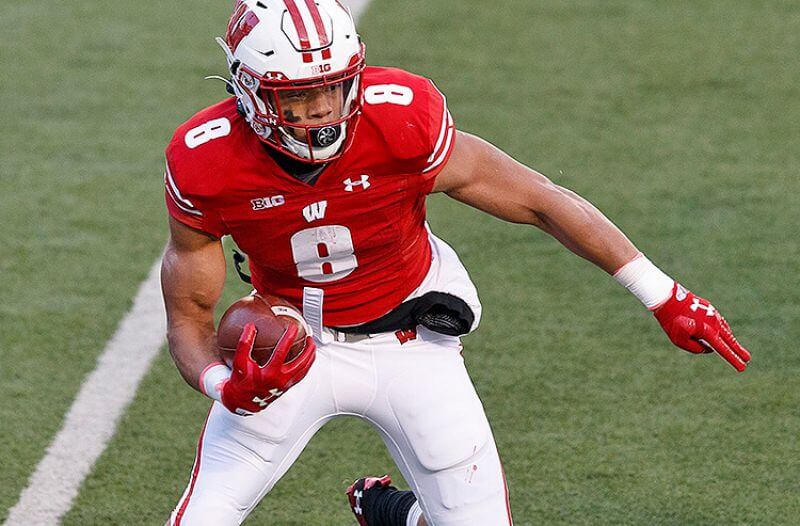 After missing Wisconsin’s last two games, RB Jalen Berger should be back for the Duke’s Mayo Bowl, where he will face a Wake Forest team that yields 201.1 rushing yards per game to FBS opponents.

The Duke’s Mayo Bowl will take place between the Wake Forest Demon Deacons and Wisconsin Badgers on December 30.

As might be expected for a bowl game sponsored by American’s third-most-popular mayonnaise company (admittedly I’m a Blue Plate fan myself), this matchup doesn’t exactly feature two of the best teams in the country with both programs sporting .500 records. College football betting lines opened with the Badgers as seven-point favorites.

We break down the college football odds with our best free picks and predictions for Wake Forest vs. Wisconsin at the Duke’s Mayo Bowl on Wednesday, December 30, with kickoff at noon ET.

It’s expected to be a cool but clear day at Bank of America Stadium in Charlotte, North Carolina, with temperatures between 30 and 43 degrees, a mild breeze of 4.3 mph and an 18 percent chance of precipitation. Be sure to monitor the gametime conditions with our NCAA football weather info.

The Under is 4-0 in Wisconsin’s last four games overall. Find more NCAA betting trends for Wake Forest vs. Wisconsin.

Against the Spread (ATS) Pick

The Badgers finished the regular season with a 3-3 record after a hard-fought 20-17 overtime win against Minnesota. Wisconsin’s defense has looked excellent this season, holding opponents to just 263.5 yards per game, but its offense has struggled.

The Badgers attack should be able to get on track against a Demon Deacons defense that is fresh off a pair of losses where they allowed 45 points to Louisville and 59 to North Carolina.

Wisconsin quarterback Graham Metz has been inconsistent, but that’s allowed freshman running back Jalen Berger to emerge as a dynamic runner behind a stout Wisconsin offensive line. An injury kept Berger out of action in the last two games but he’s expected to suit up on Wednesday and should be able to shred a Wake Forest defense that yields 201.1 rushing yards per game to FBS foes.

That Wake Forest stop unit could be even worse without its best player in defensive end Carlos Basham Jr., who has decided to opt-out of the game and prepare for the NFL Draft.

Expect Wisconsin to exploit the vulnerable Demon Deacons defense while its own defenders keep Wake’s attack in check. Take the Badgers to win and cover.

The total for this game opened at 55 before dropping to 52 and we like the way the money is flowing.

Wake Forest might play at a fast pace and average 37 points per game but they have a recent history of lower-scoring games against tough opponents, going 6-1 to the Under in its last seven games as an underdog.

The Deacons haven’t played against a defense as good as Wisconsin’s since their season opener versus Clemson, where they mustered just three points through the first three quarters.

Wake Forest QB Sam Hartman has played well this season but he’ll be taking on a Badgers defense that holds foes to just 169.8 passing yards per game and his offensive line has been among the worst in the country.

With Wisconsin cashing the Under in four straight games, back it again at the Duke’s Mayo Bowl.

Did you know that if you parlayed today’s Duke’s Mayo Bowl: Wake Forest vs. Wisconsin picks, you could win $26.45 on a $10 bet?

Use our NCAA parlay calculator to create your own parlays and see their potential payouts.

Where Can I Bet on College Football Bowl Games?