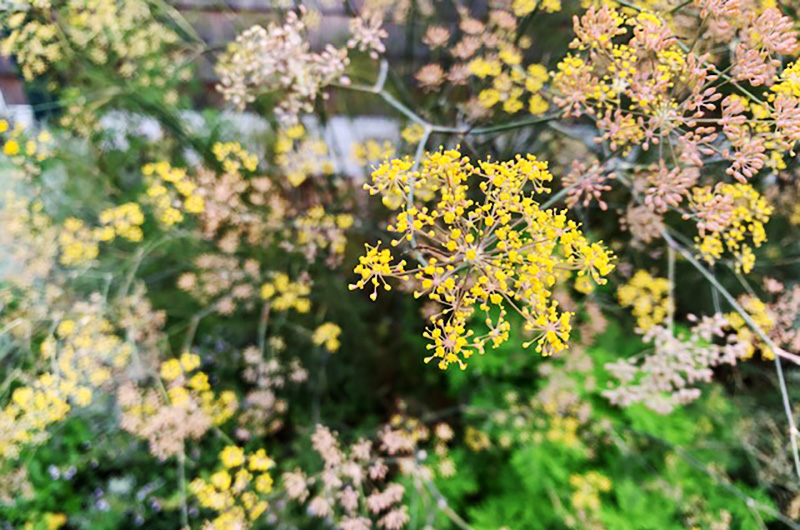 In her book, The Mistress of Spices, Chitra Banerjee Divakaruni pairs seasonings with the senses and with days of the week. “Each day has a color, a smell” and “each spice has a special day.” She describes fennel as “the spice for Wednesdays, the day of averages, of middle-aged people…smelling of changes to come.”

Divakaruni doesn’t give fennel its due. My middle-aged self is obsessed with the sight, scent, utility and attractiveness of this all-star vegetable, herb and pollinator magnet. Thomas Jefferson was more closely aligned with my fondness for this plant, enthusing that “the fennel is beyond every other vegetable, delicious. It greatly resembles in appearance the largest size celery, perfectly white, and there is not vegetable equals it in flavor. It is eaten at dessert, crude, and with or without dry salt, indeed I preferred it to every other vegetable or to any fruit.”

Fennel, Foeniculum vulgare, is the brightest bulb in the produce box for its taste and multitude of uses. Practically all parts can be eaten, from the above-ground bulb described by Jefferson, to the shoots, stems, leaves, seeds, pollen, fruit and flowers. Though one of three main ingredients necessary for the preparation of absinthe, fennel was not the cause of that intoxicant’s reputed hallucinogenic and addictive properties, but has quite a storied history of its own in addition to its culinary comforts.

“Marathon” describes a plain or field of fennel and was where a battle was fought between Persian and Greek warriors in 490 B.C.E. After the defeat of the Persians in the Battle of Marathon, a Greek runner was sent to sprint 26 miles to announce the news to all of Athens, giving rise to the name of the 26-plus-mile running race now popular. Fennel was not only the location of the battle; it was what gave the warriors courage after drinking tea made from the herb. The Greek soldiers obtained this plant from the field before they fought their enemy.

Shakespeare picked up on the plant’s reputation by having Falstaff describe a brave man as one who eats fennel. When not making soldiers brave, fennel was employed to deter another less tangible enemy. Ghosts were kept away from homes when residents placed fennel seeds in their door’s keyhole. Prometheus (of mythological fame) used a giant stalk of fennel to carry fire from Mt. Olympus to earth, after stealing an ember from the gods and hiding it in a hollow fennel stalk.

In Ancient Greece and Rome, fennel served as an insect repellent, though this is a contradiction, since a variety of insects such as bees and other pollinators love its yellow flowers. Black swallowtail caterpillars, too, lay their eggs on fennel and employ the plant as a larval food source when the eggs hatch into caterpillars. In France, fennel was valued by Emperor Charlemagne, who required cultivation of it on all imperial farms.

While many of us plant this of our own free will in our gardens, it can escape and become naturalized. If you think you have found fennel in the wild, check twice, since poison hemlock is a lookalike.

Henry Wadsworth Longfellow elevated this plant to its highest level when suggesting its ability to make the blind see. In his 1842 poem, The Goblet of Life, he sings its praises:

Above the lower plants it towers,
The Fennel with its yellow flowers;
And in an earlier age than ours
Was gifted with the wondrous powers
Lost vision to restore.

It was Shakespeare, again, who immortalized the plant’s name: in Ophelia’s dramatic final appearance in Hamlet, she enters saying “There’s fennel for you…,” handing out herbs to her bewildered family. There was no need for Shakespeare to elaborate on the symbolism of the plant: his audience was steeped in its folklore. Source of sustenance, bravery, nostalgia and perhaps even otherworldly powers, it has descended from Prometheus’ realm down to our gardens with all its mythological and delicious properties intact.