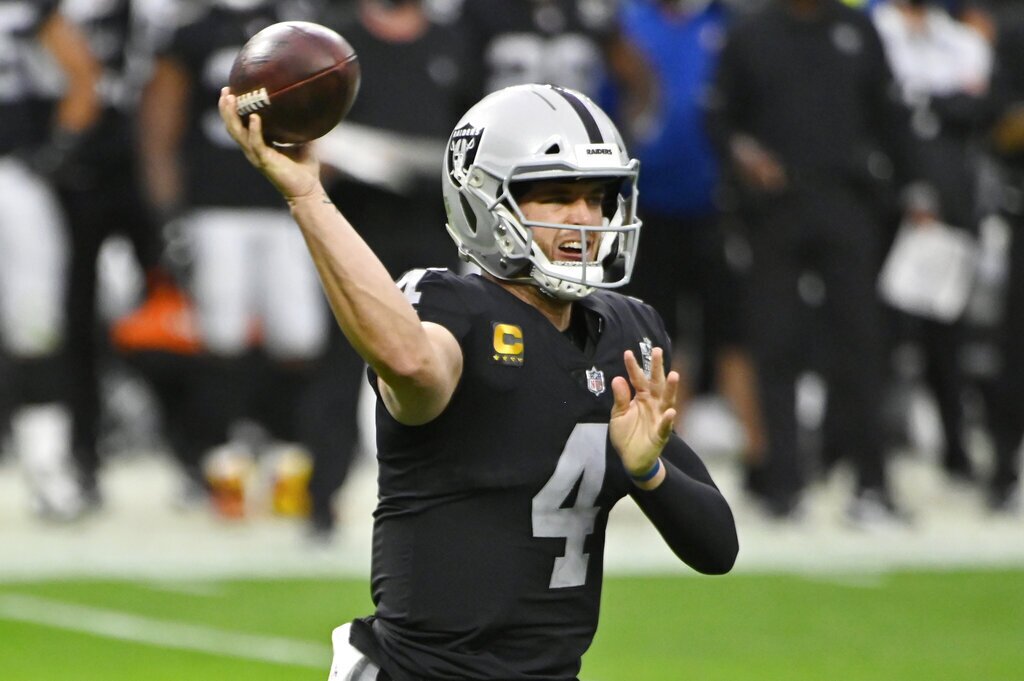 Featured in this article:

The Chargers picked off Matt Ryan three times and shut the Falcons out in the second half as they rallied for a last-second, 20-17, home win. Los Angeles improved to 4-9 overall, but remain just 5-7-1 against the spread this season as the Chargers look ahead to 2021.

Three turnovers, inability to convert in the red zone and porous defense all contributed to the Raiders 44-27 loss to the Colts Sunday afternoon. With playoff hopes fading to, um, black (don’t even think about Super Bowl 55), Las Vegas sit at 7-6 SU and ATS this season.

Las Vegas opened as 3.5-point home favorites, but consensus is Raiders -3 as of Monday morning. The Chargers moneyline ranges between +165 and +171. The point total opened at 55, but has dipped to 54.5. The total has gone OVER in 10 of the Raiders last 13 games.

Las Vegas and Los Angeles combined for 57 points in their first meeting, a 31-26 win for the Raiders.

It’s easy to forget that Tyrod Taylor was suppose to be the team’s starting quarterback this season. However, a medical miscue led to a punctured lung for the veteran quarterback and propelled rookie Justin Herbert into the starting lineup. Herbert has passed for 304 yards per game with 25 touchdowns, 10 interceptions, and a 94.7 QB rating through 12 games, which places him in the company of Ben Roethlisberger and Matthew Stafford. His 66.3 completion percentage is better than both Big Ben and Tom Brady.

The return of Austin Ekeler from a hyperextended knee and hamstring injuries should no doubt spark this offense the rest of this season and on into 2021. Though he’s only played seven of the team’s 13 games, the hybrid running back leads the Chargers in rushing yards and receptions.

Though they held a Falcons offense averaging better than 25 points per game to 17 last Sunday, the Chargers have a long way to go on the defensive side of the ball and on special teams. Los Angeles allows the sixth-most points per game this season, 27.8, and that metric has ticked up over the past three games to 29.7. With the Raiders offense ranked 10th in the league in points scored per game, 26.9, head coach Anthony Lynn and defensive coordinator Gus Bradley better get creative in their attempt to keep Derek Carr’s crew out of the red zone.

It turns out allowing 37.5 points per game over the past month negatively impacts one’s job security. So, the Raiders fired defensive coordinator Paul Guenther after their embarrassing loss to the Colts placed them behind the proverbial 8-ball in terms of earning a wild card playoff spot.

After starting the season 6-3, the Raiders have now lost three of four and when you dig into key defensive game metrics, it’s pretty easy to see why. Here’s an sampling of how bad Las Vegas’ defense has been over their past three games:

Simply stated, the Raiders can’t get off the field and constantly place Derek Carr and the offense in the awkward position of needing to score six on every drive. It’s a recipe for disaster that has played out the past four weeks. Remember, the Raiders also needed a last-second miracle to rally back to beat the winless Jets. This is a team in disarray down the home stretch of the 2020 season.

Despite the coaching change, who is truly confident that the Raiders can cover against a division rival on a short week? Not me. Las Vegas has a slight chance to qualify for a playoff spot and Justin Herbert still has a lot to prove. These two factors lead me to believe that despite the meh quality of the matchup, both offenses can light up a scoreboard in Sin City.

Check out our expert NFL betting guide if you want to learn more about How to Bet on Week 15 of the NFL or head right to our favorite online sportsbook review page and find the right site for you!