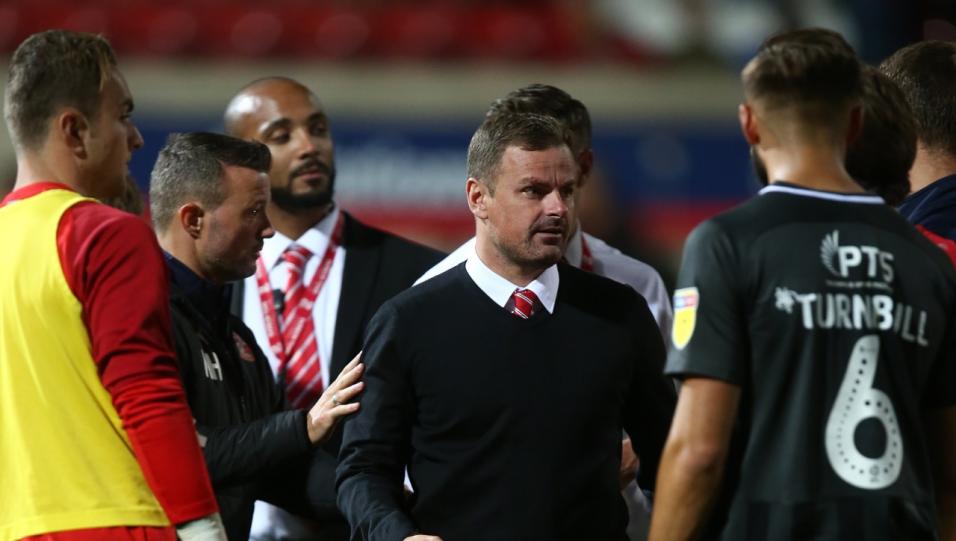 Surely Salford City can win this Friday night Greater Manchester battle of the two pre-season favourites for the League Two title, in front of the Sky TV cameras? Salford remain high-flying 8.07/1 third favourites, while their hosts are out to 60.059/1 or more in the League Two winner market.

After all, they have a new manager, Richie Wellens, to impress. Opta state that Bolton have won just one of their past six games against teams new to them in the EFL, against Harrogate last month. They emphasise Wanderers have one defeat in five (but only one win) yet also that they have only three wins in 2020. Salford, they add, last suffered consecutive defeats at the start of this year.

But what’s this? Bolton have players coming back from injury. Eoin Doyle, the division’s top scorer last season at Swindon, could come back to haunt the manager with whom he got promotion? Midfielder Lloyd Isgrove and striker Shaun Miller, each with one substitute appearance, are back in the reckoning for selection. Meanwhile, Nathan Delfouneso has been playing with a niggle (and he scored twice at Crewe in the FA Cup defeat), and captain Antoni Sarcevic has been defying back pain.

Trotters’ fans worry about a lack of playmakers and their keeper, Billy Crellin, 20, who was roundly criticised in public by boss Ian Evatt after his performance in the draw at Cambridge three weeks ago.

Salford’s last league outing, resulting in defeat, was at the surprise package of the season, second placed Cambridge, 2-1. But then they also lost 1-0 at Port Vale on their previous away trip. Wellens has some work to do

James Wilson has found a fine streak with four goals in his last seven league games, matching highly rated partner Ian Henderson. Salford were unbeaten when, much higher placed, they sacked Graham Alexander. They have lost two of five League Two matches since, but must win to emphasise their naked promotion ambitions.

Finally, Mansfield have a proper heir to Steve Evans. It’s not something that trips off the tongue easily when describing the combustible – but highly successful – former Crawley Town manager. But Evans took Mansfield to the brink of promotion from League Two. David Flitcroft couldn’t complete the job and the next two managers never looked like lifting them above mid-table. If that.

My point is, the Stags now have a manager, in Nigel Clough, fit for the purpose of realising their ambitions. Too good for the job, in fact. A big name, a proven winner at higher levels. But perhaps the same could be said for Ian Holloway at Grimsby. Clough, after taking Burton on a leisurely, long-term upward trajectory, flirted with success and controversy at Derby. Then, after a spell at Sheffield United, return to Burton and helped them into the Championship.

It might take him a transfer window or two to chuck out the players he doesn’t see fitting his requirements and recruiting his own. The key, repeated, word in his appointment press conference was “potential”. But he has already witnessed the players grow in confidence. After two draws and a first win of the season – away to Sunderland in the FA Cup – under temporary manager Richard Cooper, Clough had much praise for the squad after a second win, in the EFL Trophy albeit with a much changed side.

Maybe he is the man to rekindle the best from Jordan Bowery, who has netted just once this season, or Nicky Maynard who presumably joined from Bury a year ago thinking Mansfield could, like the Shakers had done, push for promotion. Again, one goal this season is well below his career average.

They don’t really need defender Farrend Rawson, on his return to the New Lawn after leaving in the summer, to tell them how tough an assignment facing third placed Forest Green will be.

They are under their own steady upward curve under Mark Cooper and are unbeaten at home, with three wins and two draws this season. The manager left out the spine of the team for the FA Cup defeat at Lincoln and felt the replacements should have stepped up better. The performance was “soft”.

Why did he drop them? Five goal top scorer Jamille Matt has played virtually every minute of the season. Ebou Adams was nursing an injury. Key defender Jordan Moore-Taylor had played two games in four days after recovering from Covid. Cooper felt it necessary to protect them ahead of Mansfield.

That shows you his priorities. It isn’t the time or place for Mansfield to continue their progress with a win. Could the visitors force a draw? They have finished level in four of their five away games this season and in seven out of 11 overall. Under their temporary boss, they drew at home with draw heavy Walsall. A week later they were held to another by a last minute Bolton equaliser. Forest Green, despite a slight doubt about their ability to score in abundance, are in far better form than both. The hosts should be fired up enough by an angry sounding Cooper to take what Opta say would be a fourth straight home win for the first time since February 2018.

Suddenly, a season with plenty of odds-on prices – limiting betting options as far as I am concerned – throws up a number of fixtures where teams that surely should win at home are above evens. Port Vale, Cambridge and Oldham, all likely to start at under 2.26/5, should win at home on any sort of form reading. Morecambe, on home form that is becoming a little historic, ought to see off a poor Stevenage outfit at2.56/4, but the latter might pinch a goalless draw.

Carlisle, meanwhile, deserve more respect than their odds of 2.68/5 suggest, given that they have won all five home games this season. Opta say they will be attempting to win seven in a row for the first time since December 2016. Colchester, a solid side, and leaders Newport are among their victims as Chris Beech‘s side have climbed to a very healthy fifth place.

Youngster Jon Mellish is certainly loving life, with six goals that will put him in the spotlight for other clubs. Callum Guy and Lewis Alessandra are likely to replace Joshua Kayode and Dean Furman who are on international duty. They have plenty of first team action this season.

For the visitors, keeper Scott Flinders is ready to return after 10 months out with a broken leg. He has featured in the EFL Trophy and with West Brom loanee Josh Griffiths on international duty could well start.

The Robins have lost their last two on the road, having won their previous three this season to nil. At least they scored in those two losses. Young Ellis Chapman made an impressive full debut in the FA Cup defeat of South Shields. Alfie May, who scored twice, is coming back to his old form – acting like a “wasp” to opponents – says boss Michael Duff. As the visitors have one win in four, I fancy the momentum is with this hosts’ home record.

As outsiders go, Crawley look overpriced to me – and the tip as outsider of the week. Opta’s stat that Crawley will be looking to avoid consecutive League Two defeats for the first time since November 2019 (after their loss at Walsall) might have something to do with another fact. They alternated between home and away fixtures for the first seven games and their home form (four wins, a draw and a defeat, 12 goals for and two against) contrasts rather starkly with that away (one win, a draw and four defeats, five goals for and 10 against).

So why the optimism this weekend? In their past two League Two away games, they narrowly lost 1-0 to high-drawing Walsall and took a point at Salford. Also, Max Watters has signed in the past month, netting five goals in six games. That was before the craziness of Crawley’s 6-5 win after extra time at Torquay in the FA Cup on Sunday.

The Gulls just couldn’t hold on to any lead, but the Red Devils showed their resilience to come back, time and again, against the undefeated National League leaders. Tom Nichols scored a hat-trick.

Crawley have a fine record against teams they have faced for the first time in the EFL, Opta state. The last 14 of them, that is. They have won eight times and drawn five.

Simon Weaver told Harrogate there were “nothing wrong with us as a team” after their defeat to Hull in the EFL Trophy. Sitting two points behind Crawley, they will want to use this as a game to get back to winning ways after three defeats and a draw in four matches. Whether Jack Muldoon or an ageing Jon Stead can do that here is another matter.