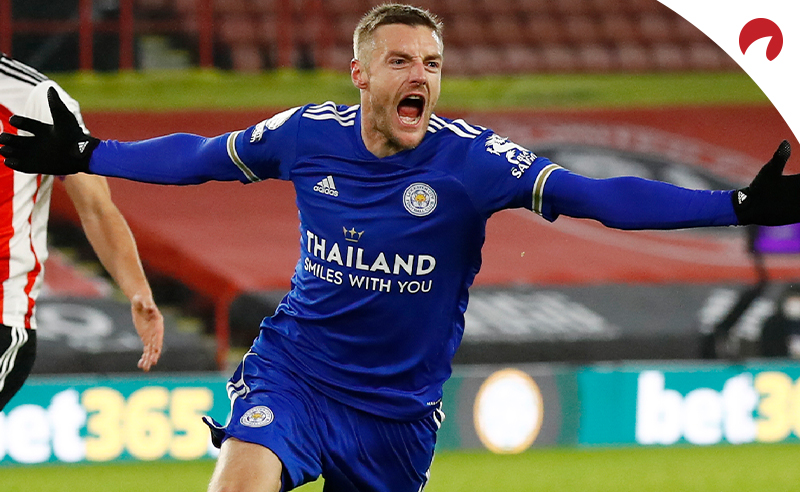 The battle for the 2020-21 English Premier League title is as open as perhaps any top-flight title race in the league’s history … apart from one.

Five years ago, in the 2015-16 English Premier League season, Leicester City spectacularly confounded bookmakers’ preseason odds of 5,000/1 to win their first and only Premier League title in stunning style.

Back then, the Foxes were led to victory by a courageous captain, a fearless manager and an array of exciting young talent that was capable of winning games out of nowhere. If that Leicester City team should remind you of any other side in the Foxes’ history, then it is perhaps this year’s squad plying its trade at the King Power Stadium.

Under manager Brendan Rodgers, Leicester has been sensational at times this season, with the attack spearheaded by Jamie Vardy, the remaining outfield hero of the 2015-16 season, and complemented by new stars such as James Maddison, Youri Tielemans and Harvey Barnes. Leicester and Manchester United are tied for the most wins in the Premier League with the season at the halfway stage.

Could this season mirror 2015-16 and see Leicester crowned the champion? One thing is for sure – the bookies won’t be caught cold as they were five years ago, as Odds Shark experts explained in the entertaining video above about the sports betting shock of a lifetime.

This season, Leicester City has already lost five league games, but the Foxes have just one fewer point than they did at the same point in the title-winning 2015-16 campaign, largely due to their ability to win games others would draw. Could the East Midlands side win the Premier League title again?

Let’s take a look at the current EPL winner odds via Bovada:

Odds as of January 25 at Bovada

When the 2020-21 English Premier League season began, Leicester City had odds of +10000 to win the title at Bovada. Today, they sit at a much more fancied +1800 in the betting odds, so why the change and how have their odds remained at a lower rate this season when they were equally impressive in the first half of last season without it being reflected in the odds?

The injuries that Leicester suffered at the turn of the 2019-20 season were debilitating to a squad that had less consistency. Since last season, players such as Tielemans and Maddison have turned from exciting players to key reliable components in a well-oiled machine. Then there’s the defense, which missed players such as Ricardo Pereira and Caglar Soyuncu for long sections of last season.

This year, while both those players are only just returning to the fold, others such as summer signing Timothy Castagne and James Justin have developed into top players. It says a lot that Ben Chilwell has hardly been missed since going to Chelsea in the summer for £45 million.

It is largely due to a squad full of dependable defenders and awesome attackers – none of whom have long-term injuries – that Leicester’s odds have remained comparatively short when looking at this year as opposed to last season.

The EPL’s Other Main Rivals

Current favorite Manchester City (-190) is above the Foxes only on goal differential, but bookmakers have the Citizens as the odds-on favorites to win the division.

Liverpool (+400) is the main reason that Pep Guardiola’s side is so strongly favored in the betting market, with Jurgen Klopp’s side winless in six games and going out of the F.A. Cup to rival Manchester United to boot. While Liverpool’s quality will no doubt return, whether it does so in time to truly threaten the top of the Premier League is highly debatable.

Leicester has already beaten Manchester City this season, though, thrashing Pep Guardiola’s side 5-2 at the Etihad Stadium earlier in the season. Leicester also drew 2-2 with Manchester United (+800), the only other side ahead of them in terms of the betting market this season.

United is currently top of the league and arguably poses the biggest challenge to Brendan Rodgers’ side, especially as they are the only side in the division with a better away record than the Foxes. The Red Devils are unbeaten in 17 away games, their longest-ever unbeaten run away from home in the Premier League in their history, and will be a tough challenger for Leicester to overcome.

Below Leicester City in the league, Tottenham Hotspur (+2200) has slightly longer odds than Rodgers’ side and is capable of putting together a long unbeaten run of its own. Jose Mourinho is a wily character and will be looking forward to the clash between the two teams on the final day of the season at the King Power Stadium.

What Could Go Wrong for Leicester?

While Leicester has gotten off to a terrific start in the Premier League campaign, the second half of the season has proved a stumbling block to sides going for a rare title win in the past. For example, back in 1995-96, Newcastle United led Manchester United in the Premier League table by 12 points in January but was eventually overtaken.

Losing a lead in the new year isn’t only down to injuries or consistency but also lacking the ability to win matches in difficult circumstances with the pressure getting bigger in every game as the title race gets tighter and tighter.

Leicester City’s title run back in 2015-16 had become very difficult for Claudio Ranieri’s side a week or so before Tottenham Hotspur essentially imploded, leaving the Foxes to waltz toward the line. Last year, Liverpool may have won at a canter, but that was as much due to the failure of others to keep up in any meaningful way. The previous season when it was close the whole way, Liverpool didn’t close it out.

While Leicester might be expected to win more than they lose in the second half of the EPL season, whether they can consistently win is another question. If they can, they’re likely to rely heavily on the mercurial finishing of a certain Jamie Vardy, who is the third favorite in the race for the Golden Boot.

Odds as of January 25 at Bovada

How Will Leicester Fare in Coming Months?

With Leicester City continuing to fight for glory in the race to become the 2020-21 English Premier League champion, will they keep up their current form over the next month and put themselves in a great position for their first title race in five years? We’ll return later in the season to find out.

If they can maintain their perfect start to the new year and win enough games to overtake the Manchester clubs to go top of the Premier League, Leicester City would be surprise champions, albeit not quite at the level of the 5,000-to-1 shots the Foxes were five seasons ago under Claudio Ranieri.