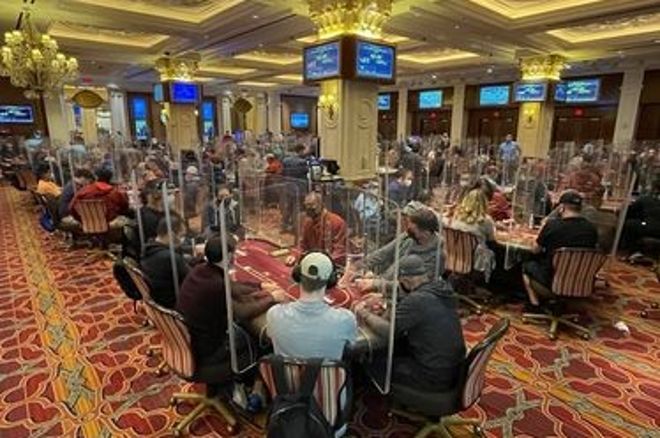 The tournament will be live reported by PokerNews and start players with 25,000 in chips. Levels will be 40 minutes with late registration open until 6:25 p.m. PST during both starting flights. Day 1a will begin at 11:10 a.m. PST on Friday, January 1 with Day 1b taking place at the same time on Saturday, January 2. The surviving players from both flights will then return at 11 a.m. PST on Sunday, January 3 to play down to a winner.

During the latest Venetian DeepStack Extravaganza, players must wear a mask and sanitize their hands before sitting down. Action is 8-handed at tables featuring Plexiglass dividers, which are wiped down each time a new player comes in. Additionally, dealers are required to sanitize their hands each time they enter and exit a table, and fresh decks of cards are circulated every two hours.

Click here for a look at the current Venetian DeepStack Extravaganza schedule.

Due to the pandemic, Season 11 of the MSPT was interrupted at the beginning of March. After a six-month hiatus, the tour returned August 28-30 at Grand Falls Casino, which is situated just outside Sioux Falls, South Dakota. The stop proved to be a tremendous hit asthe $1,100 buy-in, $100K GTD Main Event attracted 518 entries, well ahead of the venue’s previous record of 238 runners from 2015.

In January of 2019, the MSPT hosted the annual $1,100 buy-in, $1 million GTD Poker Bowl, a tournament that attracted 1,093 entries. The night before the Kansas City Chiefs dispatched the San Francisco 49ers to win Super Bowl LIV, Bob Whalen claimed $100,682 in prize money after a five-way deal was struck.

The upcoming MSPT Venetian is expected to once again attract a big field, and PokerNews will be on-site to capture all the action.

Get latest NFL Lines at Oddschecker US