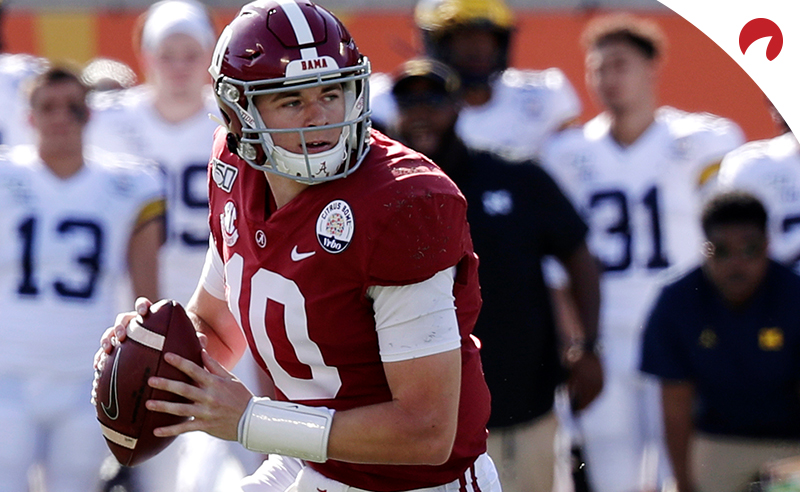 The SEC is past the halfway mark of its shortened 10-game season and Alabama is the clear favorite with odds of -400 to win the conference championship. The Crimson Tide are off to a perfect 6-0 start to the season, with Auburn the only ranked opponent remaining on their schedule.

BetOnline has released updated SEC championship odds and Alabama is the -400 favorite to win the conference title. Florida (+250), Texas A&M (+1600) and Georgia (+5000) round out the four teams remaining on the oddsboard.

Here’s a look at the full list of odds to win the 2020 SEC championship:

Odds as of November 12 at BetOnline

Alabama Is The Clear Favorite

For the better part of a decade, Alabama has been the team to fear in the SEC and has appeared in five of six College Football Playoffs, falling short last year for the first time since the format was introduced. Not only are the Crimson Tide the SEC championship odds favorite, but they are now also the top team on the oddsboard to win the national title.

Alabama is led by quarterback Mac Jones, who is the second favorite in the odds to win the Heisman Trophy. Jones has been exceptional so far, completing 78.5 percent of his passes for 2,196 yards with 16 touchdowns and two interceptions. He also decimated Georgia’s defense, arguably the best in college football, for 417 yards with four touchdowns and a pick.

Jones isn’t the only notable person on the offense, as running back Najee Harris is doing a phenomenal job with his electric play in giving Jones short yardage to work with. Harris’s 14 rushing touchdowns are the most in the country.

The Crimson Tide did lose top wideout Jaylen Waddle to a season-ending ankle injury but DeVonta Smith is becoming one of the best wideouts in the nation. The Crimson Tide look to be on their way to winning yet another SEC title this year, as head coach Nick Saban has the team clicking as usual.

Which Team Is Providing The Best Value?

It’s tough to bet against Alabama, but the team that I think has the best chance to challenge for the SEC title is the Florida Gators at +250.

Quarterback Kyle Trask has played himself into the Heisman conversation with some great performances. He has four touchdowns or more in each of his starts, giving him 22 passing scores in just five games. Trask likes to focus on his two favorite targets, wideout Kadarius Toney and tight end Kyle Pitts. This has put Florida into the national championship conversation as the sixth-ranked team in the nation and for good reason.

The Gators have the 12th-ranked offense in college and most recently just beat down the Georgia Bulldogs. Florida put up 38 points in the first half before being held without a touchdown after halftime. Trask was phenomenal in spreading the ball and hitting four different targets for a score.

Florida gets to avoid Alabama altogether on its regular-season schedule, with five easier games remaining. Following the Gators’ big road win against Georgia, they are now primed to face Alabama in the SEC championship game, where they would have an opportunity to shock the nation and upset the Crimson Tide.

When it comes to college football, the SEC is a powerhouse with some of the top schools in the Division 1 landscape. When you check out your NCAAF sportsbook of choice, you’ll see futures odds laid out like so:

The Crimson Tide are the favorites. You can tell this by the minus sign (-). The other teams are underdogs. You can see this because of the plus sign (+). When there is no clear fave (lack of minus sign), the squad with the lowest odds would be it.

If you like Alabama and place a $100 bet on the Crimson Tide, you’d get a payout of $125 if they won – your original $100 is returned coupled with your winnings of $25. If you think Texas A&M has a better shot at the championship, that same $100 would give you $1,700 – your original money is returned along with your prize of $1,600. A bet on the Aggies is riskier, which is why the wager would come with a bigger reward. But, you shouldn’t bet dogs blindly. Do your research before making a bet to ensure that your bet isn’t a long shot.

What is a Futures bet on SEC Championship Odds?

If you were to bet on a school’s odds to win the SEC championship, you’d be making a futures bet. This is a bet made on events that have yet to happen. Sure, all sports betting is on stuff that hasn’t happened yet; however, with futures, you can bet weeks or even months in advance. As soon as the odds are announced, you can bet. If you see odds you like in July, take them because oddsmakers adjust the lines as the college football season unfolds.