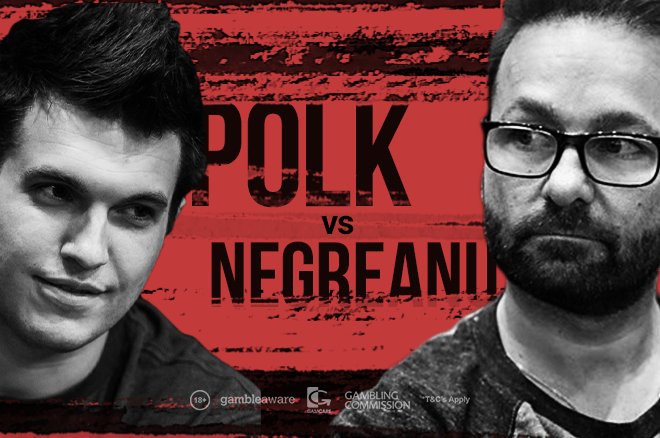 While the heads-up $200/$400 no-limit hold’em match between Daniel Negreanu and Doug Polk started off swimmingly for the former, things have turned in a hurry once play moved online.

Over the course of two sessions played on WSOP.com, the favored Polk took back the six figures he lost live in the PokerGO Studio and then some, racking up nearly $400K in winnings and opening up a decent-sized lead of $268K.

The duo have just crossed the 1,000-hand mark, so tons of play remains, but it’s certainly an auspicious start for the online cash legend, given that nearly all of the remaining hands figure to be played on his turf.

Learn everything there is to know about Polk vs. Negreanu!

Negreanu had slightly the better of the early play, but the first huge all-in pot went against him after he three-bet a $910 open to $4,140 and

flopped. Negreanu continued big for $6,210 and Polk peeled to see the

A bit after that, they played two big ones simultaneously on dangerous boards. With

on the felt, Negreanu shoved a set of nines and got called by

for a jack-high straight, sending over a stack on the cooler. On the other, he got small value betting $6,410 into $32K on

Overall, Negreanu took the worst of it and was stuck $50K.

They were over $50K deep on one table when they got it in preflop with Negreanu holding pocket tens and Polk having coolered him with queens. The ladies held and a six-figure pot went to Polk.

About halfway through the session, Polk got a four-bet to $11,219 in and Negreanu shoved on him again. Once again, Polk had the queens, this time dominating

shown by Negreanu to scoop up another $47K from his rival.

After that, Polk just continued to win most of the five-figure pots. He slowly but surely increased his lead until he was up an estimated $200K, holding stacks north of $160K on both tables while Negreanu sat with around $40K.

As the session was heading into the final stretch, Polk three-bet preflop to $3,768 and got a call from Negreanu. Polk continued for the same amount on

and they saw an

turn. Polk potted for just over $15K and Negreanu called again, bringing the

river. Polk stuck the last $42K in and Negreanu looked him up with

but was shown the

Learn about legal online poker in the U.S. by clicking here!

Almost right off the bat, Polk got aggressive when he three-bet pre to $4,110 and Negreanu called. Both players checked the flop for a board of

and Negreanu went with a large sizing of $6,165 after Polk checked again. Polk called and checked the

river. Negreanu bet big again with $15,412 and Polk shoved all in. It was only $21K more effective into a pot approaching $75K and Negreanu decided he couldn’t get away from

. That proved a sound call as Polk was bluffing with

before both checked the

The rest of the first hour progressed relatively tamely, but Polk inched his way from -$55K into a small lead by winning enough small pots combined with one where he check-raised all in on a pretty dry jack-high board on the turn after calling a four-bet preflop and a tiny flop bet.

Polk continued to further his edge until the last half hour, when a huge pot occurred in a single-raised pot. Negreanu check-called a small bet of $763 on

river led to a final check, and Polk shoved for $41K effective into the $13K pot. The overbet gave Negreanu significant pause but he ultimately called with

. His kings up were pipped by

though and the deficit hit six figures for the day.

Polk solidified his win with simultaneous pots. In one, Negreanu barreled very small twice after three-betting as

hit the board. After the second bet, Polk put in a big raise from $2,317 to $13,187, about the size of the pot. Negreanu called and both players checked the

, appearing to give up on a bluff, but it was actually the best hand as Negreanu missed a combo draw with

and sniffed out a bluff as Negreanu made it $9,463. “Kid Poker” could only show down

for a straight blocker, while Polk had top pair from the get-go with

Shortly after, Negreanu was left staring at a second straight six-figure defeat.