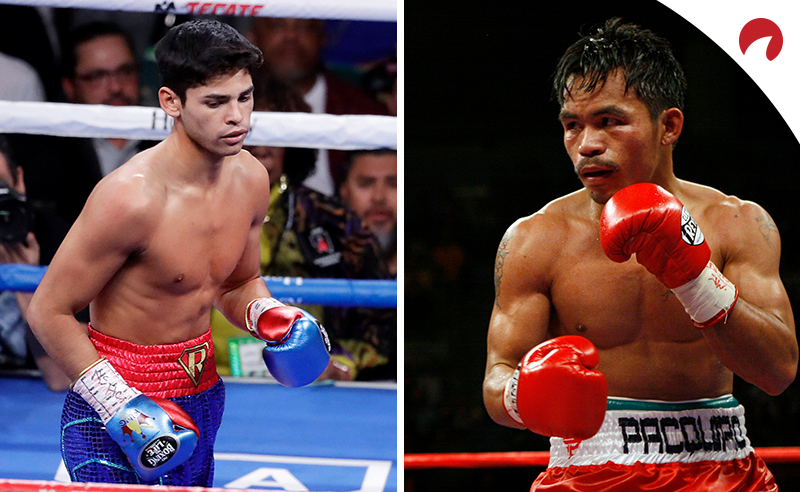 Ryan Garcia has many suitors to be his next opponent after his seventh-round stoppage of Luke Campbell on January 2. Lightweight champions Devin Haney and Gervonta Davis were floated but it appears that KingRy will take on Manny Pacquaio next.

Although there hasn’t been an official deal done, it appears the camps are in talks. There was a lot of smoke around a potential Conor McGregor vs Manny Pacquaio fight in late 2021, but with the UFC star losing at UFC 257, perhaps Pac-Man has turned his attention to Garcia.

A quick look at the Garcia vs Pacquaio odds reveals it is the elder, Pac-Man, who is the chalk with Garcia coming in as an underdog.

Online sportsbook Bovada has listed Garcia vs Pacquaio odds, with Pacquiao coming in at -150 and Garcia at +120. This means you would have to wager $150 to profit $100 with a Pacquaio win, while a $100 bet on a Garcia victory would profit you $120.

Odds as of January 26 at Bovada

New to betting on the fights? Be sure to check out our great how to bet on boxing guide. Also, keep an eye on our boxing odds page for the latest, up-to-date betting lines.

A very interesting fight and perhaps a preview of the future of boxing and a last look at where boxing was. Garcia is just 22 years old, making him 20 years younger than Pacquiao, who made his pro debut three years before KingRy was born.

Garcia a dog for the first time

Although we haven’t seen much of Garcia, set to make his 22nd pro fight, he has dominated nearly all of those who have stood across from him. Because of that, he has walked to the ring as the chalk over and over again. Most recently, he collided with Luke Campbell, by far his toughest test, and stopped the former Olympic gold medalist in the seventh round, as I guess he should have as a -500 favorite, the longest odds of his career.

Even as the favorite, is there value on the veteran Pacquiao?

Pac-Man has had a resurgence in his career, winning three straight fights for the first time since he did so from 2013 to 2014 leading up to his fight with Floyd Mayweather Jr. in 2015. Could we see a similar situation for the future Hall of Famer, with another win streak leading to a gigantic fight?

During Pacquaio’s three-fight winning streak when he won the WBA regular and super welterweight titles, he was a bigger favorite than he would be against Garcia, closing at -250 or greater in all three of those wins. So yes, at -150 odds and with a storied career, there is definitely value in backing Pacquaio.

Well, obviously the first question of business is what weight class the fight would be contested at. Ryan Garcia has been fighting at lightweight (135 pounds) and Manny Pacquiao fights at welterweight (147 pounds) or super welterweight (154 pounds). Personally, I think they try to meet in the middle at super lightweight (140 pounds) in a non-title event.

Will Garcia be too fast?

One of KingRy’s calling cards is his outstanding hand speed and general movement in the ring that catches his opponents off guard. His knowledge of range and his use of straight counters make him very difficult to hit while opening up opportunities for him to land heavy. Of Garcia’s perfect 21-0 record, 18 of his wins have come by knockout.

We learned something about Garcia in his fight with Campbell, though, after he was caught by a left hook that dropped him to the canvas. What we learned is that he has a fighting spirit, getting up from the knockdown and battling for the rest of the round all the way back to getting the win five rounds later.

Wisdom and size may give advantages to Pac-Man

Even if Pacquiao were to cut the weight and compete at super lightweight, I don’t see that as being as big an issue as it would be for a guy like Terence Crawford or Errol Spence. Pac-Man isn’t a huge welterweight; he’s thick, yes, but shorter in stature than Garcia and he could likely cut the weight appropriately to make 140 pounds and hydrate back to a more comfortable weight for the night of the fight.

This would be Pacquiao’s 72nd pro fight, to Garcia’s 22nd, and over that time he has faced a little bit of everything in the ring, so it’s very doubtful that KingRy can show him something new. Additionally, Pac-Man knows he has to close the distance to be an effective fighter. Going against a lighter man may give him more confidence to get in the pocket and let his heavy hands go to perhaps put Garcia away.

The argument about Pac-Man being bigger is definitely something to take in account, but he has just one knockout victory over the last 11 years. That said, those bouts were at welterweight, not lightweight, and that could change things. Ultimately, though, I think Garcia’s speed and accurate counters will find the target repeatedly, leading him to victory and perhaps a late-round stoppage. However, I’m not bullish on that method.