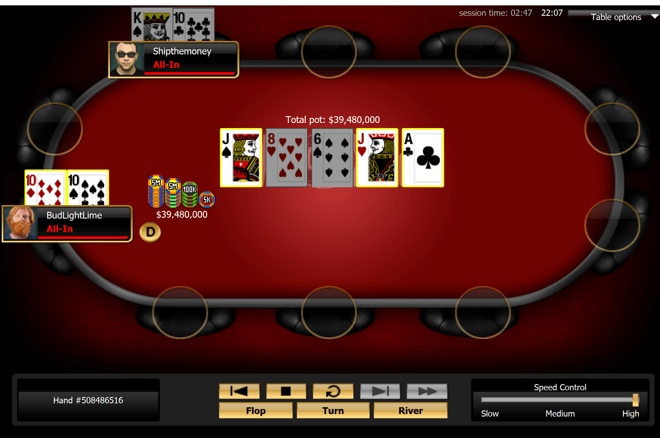 It was a redemption of sorts for Hempel, who the night before finished seventh in Event #17: $777 No-Limit Hold’em for $22,250. Hempel is also a part of the WPT L.A. Poker Classic Main Event final table, which was slated to play out in the HyperX Esports Arena at the Luxor Hotel & Casino in Las Vegas back in April. However, it is currently on hiatus during the pandemic. In the meantime, Hempel, who is guaranteed to take home at least $185,330 in that tournament, just went ahead and shipped a WSOP gold bracelet.

Barry “puigmyfriend” Hutter began the final table with the chip lead, and right off the bat action heated up. Matthew “EarvinMagic” Parry was the first to go losing with king-five suited against Daniel “IntoTheRiver” Fischer’s ace-eight, and not long after Harrison “harrison33” Dobin ran ace-king into the pocket kings of Hempel to exit in seventh place.

With six players remaining, 21-year-old Landon “ActionDealer” Tice failed to get lucky with king-nine suited to overcome “Goatmaster’s” ace-queen suited, which sent him to the rail with his first-ever WSOP cash good for $29,817.

Hutter, the most accomplished player at the table, was the next to go after his ace-queen failed to hold against Hempel’s jack-ten, and then Hempel dispatched Fischer in fourth place using five-six suited to make a flush against the latter’s king-queen. In the very next hand, Hempel got the hattrick when he flopped trips with ten-three to bust “GoatMaster,” who got their short stack all in preflop with jack-eight suited.

Hempel began heads-up play with 24 million to the 15.5 million of Myles “Shipthemoney” Kotler. While the latter managed to take the chip lead at one point, Hempel soon took it back and opened up a lead. In the final hand, Kotler called off with king-ten only to see Hempel roll over pocket tens, which held for the win.

The next tournament on the schedule – Event #19: $400 No-Limit Hold’em – will take place at 3 p.m. PDT on Sunday. The PokerNews Live Reporting Team will once again be reporting all the action, so be sure to tune in then to see who captures the next 2020 WSOP bracelet!

The first step in getting set up to play on WSOP.com is to download the client. You can do so for both mobile (Android and iOS) and desktop (Windows 7 or higher and Mac OS X 10.6.8).

To get the correct version of the client, use the links below: