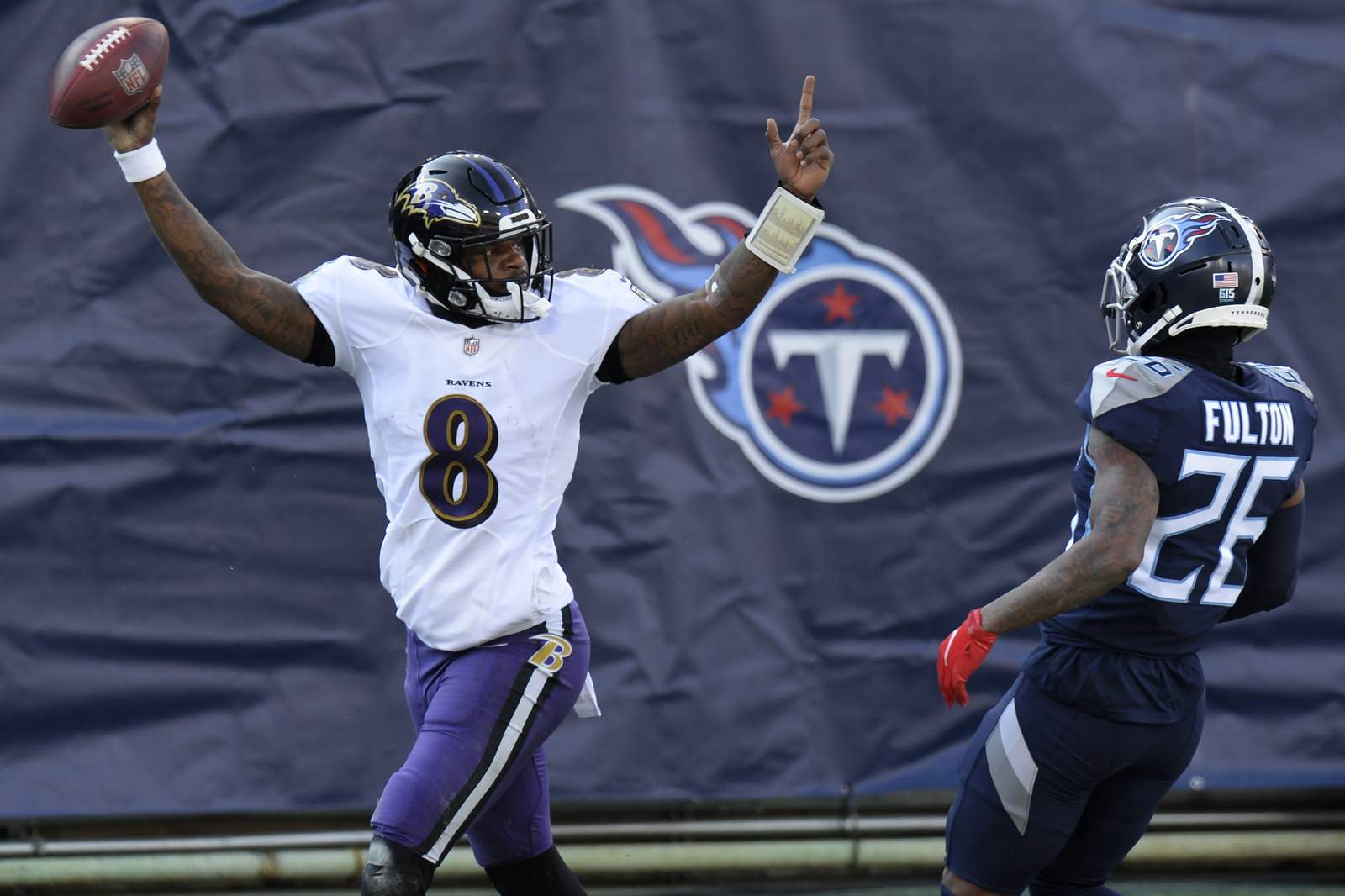 The Latest on wild-card Sunday in the NFL playoffs (all times EST):

The Tennessee Titans have ended the Baltimore Ravens’ run of 17 unanswered points with a short field goal after stalling at the Baltimore 4.

Stephen Gostkowski’s 25-yard field goal on the first play of the fourth quarter pulled the Titans to 17-13.

After that, Justin Tucker was wide right on a 52-yard field goal attempt.

After going up 10-0, the Titans ran seven plays for minus-7 yards in the second and third quarters as the Ravens got a field goal and two touchdown runs to take a 17-10 lead.

The Ravens have held NFL rushing leader Derrick Henry to 29 yards on 14 carries.

The Baltimore Ravens have taken their first lead at Tennessee.

Rookie running back J.K. Dobbins broke a 10-10 halftime tie with a 4-yard touchdown run that capped Baltimore’s 77-yard drive to open the second half.

The Ravens have scored 17 straight points after falling behind 10-0 in the first half.

The Ravens are the only NFL team in the last four seasons not to win a game after trailing by double digits.

Lamar Jackson and the Baltimore Ravens have shaken off their sluggish start in their AFC wild card game at Tennessee to tie the game at 10-all at halftime.

The Ravens scored 10 straight points after falling behind 10-0 in the first quarter.

The Titans have matched their season high with four sacks of Jackson. But Jackson broke loose on third-and-9 and scampered 48 yards for the tying touchdown.

That was the longest touchdown run by a quarterback in the playoffs since Colin Kaepernick went 56 yards for the 49ers against the Packers on Jan. 12, 2013.

NFL rushing leader Derrick Henry has just 18 yards on 10 carries so far for the Titans. Henry rushed for 2,027 rushing yards this season, the fifth-most in NFL history.

The Baltimore Ravens have erased an early 10-0 deficit in their AFC wild card game at Tennessee.

Lamar Jackson raced for a 48-yard touchdown on third-and-9 to tie the game after Justin Tucker got the Ravens on the board with a 33-yard field goal.

Jackson is the first quarterback in NFL history with multiple 1,000-yard rushing season.

Butler’s takeaway led to a 45-yard field goal by Stephen Gostkowski, who was activated off the reserve/covid-19 list earlier this week. That gave Tennessee a 10-0 lead with 1:38 left in the first quarter of their AFC wild card game.

This was Butler’s first playoff interception since Super Bowl 49 when he picked off Russell Wilson’s pass at the goal line in the closing seconds to preserve New England’s 28-24 win over the Seahawks.

Tennessee forced three turnovers in beating Baltimore in the divisional round a year ago. The Titans led the NFL with a plus-11 in turnover margin with Butler tied for the team-lead with four interceptions during the regular season.

The Titans have taken the lead in their AFC wild-card game with the Baltimore Ravens.

Both teams opened with a three-and-out. Then the Titans went on a 10-play, 70-yard drive with Ryan Tannehill throwing a 10-yard touchdown pass to A.J. Brown with 5:39 left in the first quarter.

Tannehill threw for a career-high 33 touchdowns this season. He has started this game completing 6 of 7 for 70 yards, and Brown has been his best target with 52 yards receiving on three catches.

The Ravens have been putting five and six defenders on the line to slow down NFL rushing leader Derrick Henry. He has five carries for just seven yards to open this game.

The road team has won each of the first four playoff games between these teams. Tennessee won in Baltimore last year in the divisional round, upsetting the then-No. 1 seeded Ravens.

The Cleveland Browns have no new positive COVID-19 tests Sunday after nearly a week of issues leading into their first playoff game in almost two decades.

The Browns will be without coach Kevin Stefanski for Sunday night’s wild-card game in Pittsburgh. He tested positive with the virus Tuesday along with Pro Bowl guard Joel Bitonio, who will also miss the game.

Top cornerback Denzel Ward won’t play either after testing positive. The Browns did get safety Ronnie Harrison, tight end Harrison Bryant and linebacker Malcolm Smith back to face the Steelers.

It’s not yet known if they’ll have All-Pro right tackle Jack Conklin. He was listed as questionable with an “illness” and traveled separately to Pittsburgh.

In addition to Stefanski, the Browns are also without several assistants, including offensive line coach Bill Callahan.

Cleveland is making its first playoff appearance since the 2002 season. The Browns are facing two other major droughts: They’ve lost 17 straight at Heinz Field and haven’t won a road playoff game since 1969.

The Titans are led by running back Derrick Henry, who’s 2,027 rushing yards this season was the fifth-most in NFL history. Henry led the league with 17 touchdown runs.

Henry ran for 195 yards in the Titans’ 28-12 win over Baltimore in last year’s playoffs. That was his third career playoff game with 150 or more rushing yards, one game shy of Hall of Famer Terrell Davis’ record.

The Ravens rushed for 404 yards at Cincinnati last weekend, the fourth-highest single-game total since 1950.

And Baltimore rookie running back J.K. Dobbins rushed for 805 yards and nine touchdowns in 2020. He’s had a TD run in each of his last six games.

That’s followed up by the Bears visiting the Saints and the night game pits the Cleveland Browns at Pittsburgh. The Browns are making their first playoff appearance since 2002.

To advance, the Browns will have to end a 17-game losing streak at Pittsburgh.

That was the Buccaneers’ first playoff victory since they beat Oakland in Super Bowl 37 on Jan. 26, 2003.