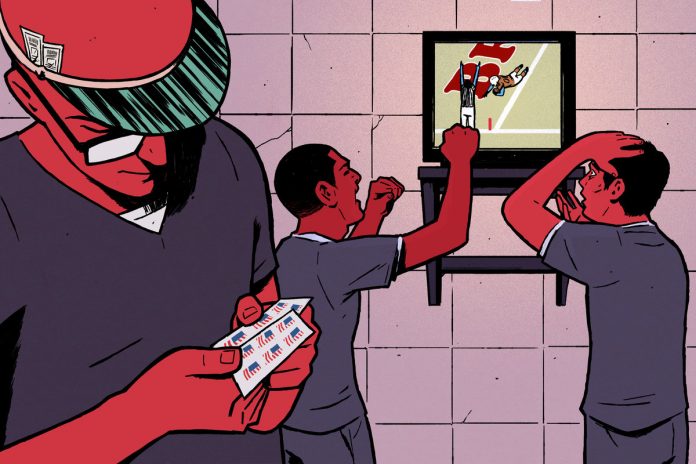 Gambling is one of many things prohibited in prisons, but that’s not to say it doesn’t go on behind closed bars. Walk into any prison in the U.S., and you’re likely to find the TV room packed with convicts latching onto their tickets and shouting profanities whenever there’s a big game happening.

And it’s not just the inmates after a slice of the action either — even the prison guards are known to get involved and place bets on the major leagues and other big sports games. This article details how sports betting and gambling work inside these facilities, along with the currencies used to place bets, and what the “house” rules are for anyone wishing to participate.

It’s only because of the inmates themselves that gambling is known to take place in prisons; otherwise, it’s an activity that is kept under the radar. People who have shared their prison gambling experiences describe it as a fun and lucrative pastime similar to gambling on the outside. But like anything else that goes on inside the slammer, it’s one that can also have hairy moments if the wrong people are involved.

Even though the authorities tend to play ignorant to what goes on, and some are even happy to accept bribes to stay quiet, it’s also important to keep it on the down-low and not flaunt the fact that people have won or placed bets. 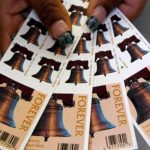 Movies like Cool Hand Luke and Mean Machine portray prison gambling as pretty obscene and merciless. But in reality, running a prison sportsbook is just like running a business. These inmates are looking to get by at the end of the day — not looking to serve more time by committing new crimes. Since money is not permitted in prisons, the currency of choice is postage stamps because of their fixed value.

Stamps are used to buy everything from drugs to food, and they’re also used to place sports bets and wager on casino games. A book of stamps is worth approximately $9.80 at the commissary in most prisons, and only depreciates to around $7 when it reaches the prison yard.

Aside from postage stamps, prisoners use other material contraband to place bets on games and pay off debts. The second most popular items are cigarettes and tobacco, but cans of mackerel and tuna are also common, as are chocolate bars. Some inmates even go as far as offering their own meals to make sure they can place a bet.

The problem with using anything other than stamps means that the value can always change, and the item in question might not appeal to everybody. Stamps, on the other hand, have a set value determined by the prison with its own fixed exchange rate. Of course, this can vary from prison to prison, but for many, it’s the most sought after currency. 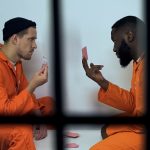 A prison’s go-to guy (or bookie should we say), will run hundreds of books and needs to be extremely crafty when it comes to stashing these away, along with any master sheets used to record bets. The bookie will set the lines for the outcomes, such as parlays, over/under lines, and straight bets. The bookie will then use other inmates — known as runners — to collect the bets from prisoners.

They run the tickets on behalf of the bookie in exchange for a cut of every losing bet. Using runners also helps the prison bookmaker avoid any suspicion or unwanted attention from the authorities. Some bookies are even known to offer free daily bets to encourage more prisoners to wager and bet more on the games. The guards sometimes slip a few bets in themselves.

What Do Prisoners Wager On?

The prison sportsbook usually allows for the same betting markets as conventional sportsbooks; the outcomes that are wagered on include sports like the World Series, the Super Bowl, NFL games, the Stanley Cup, and other major events are all possible to bet on. The games are normally aired in the prisons, making it easy for everyone to keep track of the stats and results. Watching the action in real-time also means they can keep up to date with any complications or eventualities that result in games being postponed or canceled.

One problem that prison bookmakers can run into is when they receive several bets on a favorite. If one team or a particular player receives a lot of attention and support, this can put the bookie in an awkward position when it comes to payouts. To curb this issue, many will state that prisoners need to bet on at least two or three other teams, players, or outcomes if they are adamant about betting on their favorite.

Casino and Board Games

Gambling in prison is nothing new, and funnily enough, sports betting isn’t the only thing inmates place bets on either. Traditional casino games like blackjack, poker, bridge, and rummy are often played throughout prisons over the U.S., and old school board games such as Monopoly, The Game of Life, and Risk are also known mediums for prisoners to wager on.

What Happens to Cheaters?

Prison may be a place for criminals and dodgy doings, but cheating while gambling in these facilities is something that isn’t tolerated. If an individual is caught attempting foul play when stakes are on the table, the prison residents will take matters into their own hands and deal something much harsher than just a poor hand.

It’s not uncommon for inmates to fight with each other over disagreements on the outcomes in some games. Sometimes, this can spur a mass riot that the guards then have to quash if things get nasty. This can also lead to the entire gambling operation being pulled or shut down; bookies can have their books confiscated and destroyed while runners can also face punishment for their involvement. In addition, those who bet on the games might see their stakes canceled or voided altogether.

It may be a harsh reality, but there is a reason why gambling is illegal in prisons.

Disclaimer: All images are copyright of their respective owners and are used by USA Online Casino for informational purposes only.