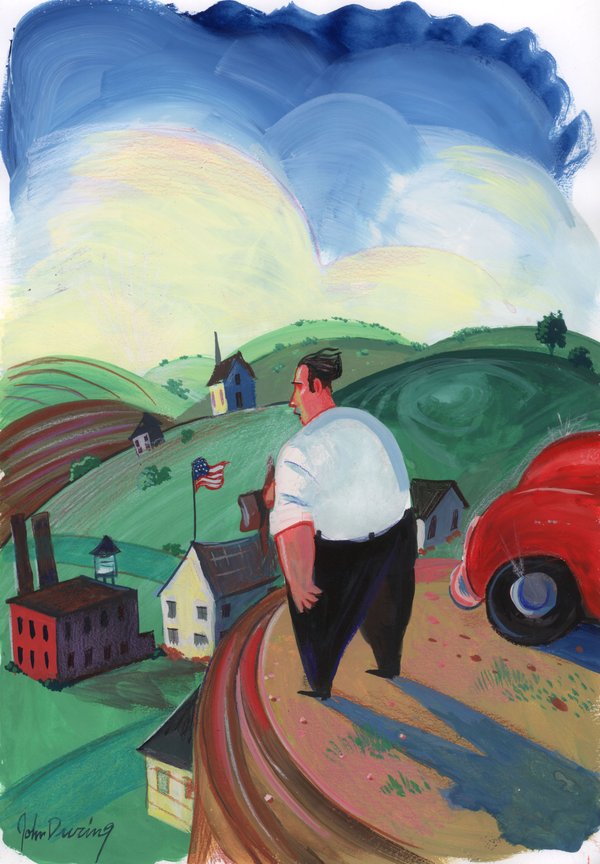 We’re in the parking lot of Cherokee Casino on the Oklahoma side of the state line, just west of Siloam Springs. The pandemic has yet to close things down. I’ve been joined by noted Arkansas historian Tom DeBlack and Paul Austin, former head of the Arkansas Humanities Council. Our goal is to drive across north Arkansas from Oklahoma to the Missouri Bootheel on U.S. 412.

Tom and Paul are now retired and have time for such adventures. Me? I call it work. Our goal is to experience north Arkansas from the Ozarks to the Delta by staying on just one highway.

Even though it’s a Monday morning, there are plenty of cars in the parking lot. Back in 2008, Cherokee Nation added an eight-story hotel with 140 rooms to its existing casino. The casino was expanded as part of the $83 million project. Almost 1,600 electronic games and 30 additional table games were added at that time to a casino that previously had 1,000 electronic games and 20 table games. After getting a cup of coffee and a doughnut inside, we cross into Arkansas to begin our adventure.

It’s quite a contrast when you go directly from a casino to the campus of John Brown University, one of the most conservative institutions of higher learning in the region. The private school was founded in 1919 by an evangelist named John Elward Brown. We visit the campus and the city’s charming downtown before heading east on U.S. 412 toward Tontitown, Springdale and Huntsville. For a few miles, we can enjoy the bucolic Ozark countryside before entering the congested confines of Springdale.

We cross the Illinois River twice. The river flows to the northwest and then to the southwest through Washington and Benton counties before entering Oklahoma. The Oklahoma Legislature declared the Illinois to be a State Scenic River in 1970. That set the stage for decades of litigation between the two states, with Oklahoma claiming that the runoff of poultry waste, along with pollution from wastewater treatment facilities in booming northwest Arkansas, had sullied the stream.

We pass from Benton County into Washington County, which saw its population almost quadruple from 55,797 in the 1960 census to 203,065 residents in the 2010 census. The county’s current population now tops 235,000 people. Washington County was established in October 1828 from what was then called Lovely County.

“Conflict between the Osage and the Cherokee in what’s now Washington County led to intermittent raids, which Indian agents and U.S. Army leaders attempted to end, often without success,” Matthew Bryan Kirkpatrick writes for the Central Arkansas Library System’s Encyclopedia of Arkansas. “William L. Lovely was assigned as the agent to the Western Cherokee by the U.S. government and sought to settle the dispute between two warring tribes and the white settlers. In 1816, Lovely made what was

known as the Lovely Purchase through an unauthorized sale of land from the Osage. The actual western border of the Cherokee land, which included portions of Washington County, was vague and remained unsurveyed until 1825.

There were settlements at Cane Hill by 1827 and at Shiloh (now Springdale) and Fayetteville by the 1830s. Lovely County was abolished by October 1828, and much of it ended up in Indian Territory. Part of what was left in Arkansas Territory was established as Washington County. By the late 1800s, this had become one of the nation’s top fruit-growing regions.

The Western Arkansas Fruit Growers & Shippers Cooperative Association was organized at Spring-dale in 1888. By the turn of the century, the county was also exporting fence posts, railroad ties and spokes from the abundant hardwood forests in the area. The fruit business waned in the 1920s, and the timber boom slowed with the virgin timber having been cut. Fortunately for northwest Arkansas residents, the poultry industry took off.

“The Aaron Poultry & Egg Co. created the county’s first modern poultry processing facility in 1914 at an old mill building on Dickson Street in Fayetteville,” Kirkpatrick writes. “In 1916, the Aaron Co. decided not to build a permanent plant in Fayetteville. But Jay Fulbright, the father of future U.S. Sen. J. William Fulbright, built a processing plant along with other investors on West Avenue in Fayetteville. The company improved local stock both in egg production and the quality of roosters. Chickens slaughtered in the Fayetteville plant were shipped to markets throughout the nation. The plant grew, changed owners and eventually was acquired by the Campbell Soup Co. in 1955.”

We reach the suburban sprawl of the Fayetteville-to-Bentonville corridor and find ourselves in Tontitown, a historic Italian community that has seen its population soar from 209 people in 1960 to an estimated 3,800 today.

Father Pietro Bandini led a group of Italian Catholic immigrants across the state from the Lake Village area in southeast Arkansas to settle Tontitown in 1898. The town was named in honor of explorer Henri de Tonti. Bandini, who died of a stroke in January 1917, was intent on creating a model community. St. Mary’s Academy, a boarding and day school, opened there in 1906. The town was incorporated in 1909, and Bandini was elected the first mayor in 1910. The railroad arrived in 1912.

Since it’s a Monday, we can’t get the local specialty of fried chicken and spaghetti for lunch, as Venesian Inn and Mama Z’s Cafe are closed on Mondays. And, alas, Mary Maestri’s is long gone. We head to another Arkansas classic, AQ Chicken House at Springdale.

Roy Ritter opened the restaurant on July 20, 1947. He was one of the first people to build large poultry houses in the region and later constructed a poultry processing plant. AQ stands for Arkansas Quality. There once were several locations across the state. Now there’s just the original in Springdale, and it’s as good as ever. It’s fitting that we eat chicken in Springdale, the capital of the Arkansas poultry industry.

We continue east after lunch and soon find ourselves crossing the lower part of Beaver Lake. Beaver Dam on the White River is to the north in Carroll County; the lake it creates is 73 miles long and two miles wide at its widest point. It reaches from almost Eureka Springs to almost Fayetteville and serves the water needs of one of the nation’s most rapidly growing areas.

The dam is 2,575 feet long and creates a reservoir that covers 28,200 acres. The first construction funds were included in a 1959 bill, but the legislation was vetoed by President Dwight Eisenhower, who had his doubts about whether hydropower from the project could be marketed. Congress overrode the president’s veto. A groundbreaking ceremony was held on Nov. 22, 1960, and power generation began in May 1965. The reservoir was full by 1968.

The sprawl begins to thin out after we cross the lake. We drive into Madison County, where the earliest white settlers arrived in the late 1820s after migrating from Huntsville in Madison County, Ala., and from Tennessee. The Legislature established Madison County during its first session after Arkansas became a state in 1836. It was formed from parts of Washington, Carroll and Newton counties. Its northern boundary originally extended to Missouri. The boundaries were changed several times before being finalized in 1885.

Railroads opened up the county’s hardwood forests for harvest, but growth slowed once those forests had been cleared. The population dropped from a high of 19,864 in 1900 to 9,068 in the 1960 census. Things soon began to turn around, though. The boom in nearby Washington and Benton counties bled over into Madison County. By the 2010 census, the county had almost 16,000 residents.

When older Arkansans think of Huntsville, they still think of Gov. Orval Faubus, who served six terms as governor from 1955-67 and was among the most famous (or infamous) people in the country following the 1957 Little Rock Central High School desegregation crisis.

The Fay Jones-designed home Faubus had built during his final term as governor overlooks the town from what’s known as Governor’s Hill. It was controversial because Faubus had a salary of just $10,000 a year as governor. He would later say “his friends” helped out. The house covers 14,778 square feet. Construction began in 1965. He moved into the house in July 1967, six months after leaving office, but later had to vacate it when the cost of upkeep and the property taxes became too much.

James O. Powell, the longtime editorial page editor of the Arkansas Gazette, once explained: “It wasn’t terribly complicated. It was done by a lot of gifts from a great range of friends of his. There was an open solicitation for funds. As I recall, we referred to them as love gifts. They were large gifts from people he had done a lot of favors for, and at the time, he was still in a position to do more favors for them. It was just the baldest kind of conflict of interest to be a governor in office and receiving gifts–huge gifts–for the construction of a house.”

Huntsville has benefited from the northwest Arkansas growth, having increased its population from 1,050 in the 1960 census when Faubus was in office to 2,346 in the 2010 census.

From there we drive east on U.S. 412 and cross two of the state’s most beautiful streams, War Eagle Creek (some call it a river) and Kings River. The streams have their headwaters in the same area, and both flow to the north.

War Eagle Creek begins in southern Madison County just west of the community of Boston. It flows to the northwest, passing the tiny communities of Witter and Aurora, continuing just east of Huntsville and crossing under U.S. 412 northeast of Harmony. Withrow Springs State Park is along the creek. The creek runs through the northeast corner of Washington County and into Benton County before entering Beaver Lake.

Kings River, which I like to call the Buffalo River without the traffic, flows almost 90 miles through Madison and Carroll counties before entering Table Rock Lake on the White River. The Arkansas Natural Heritage Commission maintains a state natural area along the river. In 2010, the Nature Conservancy purchased what’s known as the Kings River Preserve that includes almost 5,000 acres. Kings River has some of the best smallmouth bass fishing in the country, attracting float fishermen from across Arkansas and surrounding states.

We cross into Carroll County, a tourism magnet that saw its population more than double from 11,284 in the 1960 census to 27,446 in the 2010 census. We’re in the sparsely populated southern part of the county, far from the tourism attractions around Eureka Springs. We stop by the Osage Clayworks, where potter Newt Lale has been doing his thing for three decades. The pottery shop is housed in a building that was constructed in 1901 to house the Stamps General Store. The store operated until the late 1980s.

U.S. 412 veers to the north at this point, and we soon find ourselves at Alpena on the line between Carroll and Boone counties. U.S. 62 joins U.S. 412 at Alpena. The two highways run concurrently until we reach Imboden in Lawrence County. We have many miles still to go before reaching the Delta via 412.

Next Sunday: Alpena to Paragould